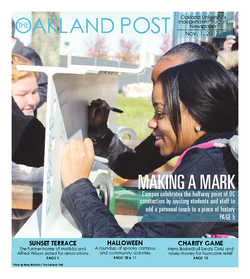 Making a mark: Campus celebrates the halfway point of construction by inviting students and staff to add a personal touch to a piece of history ; Sunset Terrace. The former home of Matilda and Alfred Wilson slated for renovations; Halloween. A roundup of spooky campus and community activities ; Charity Game. Men's basketball beats CMU and raises money for hurricane relief ; Letter from the editor: On crossing borders ; Hauntings through history ; Campus participates in Oakland tradition ; Police Files: A locker without a lock ; Half of a gallon ; Serial hugger ; The OU-AAUP is awarded in arbitration ; Career Service's host annual etiquette dinner ; Jazz concert celebrates influential musicians: Professor Sean Dobbins will lead the student band in tribute to Ella Fitzgerald ; Sunset Terrace is set to have a full makeover: The mid-century home that was owned by Alfred and Matilda Dodge will be fully renovated ; OU Embraces the Halloween Spirit ; Horror Movies in Theaters ; Student Org Profile: French Club ; Recent controversy dressing Melania Trump ; Catalonia declares independence from Spain: EU remains quiet while Spanish authorities begin to seize control from the regional government ; How Martin Luther relates to the 1st Amendment: On the 500th anniversary of the 95 Theses; it is important to remember the power of our freedom of speech ; "Suburbicon" is everything it should not be ; New film "All I see is You" requires a second watch: Protagonist Gina undergoes surgery receiving her vision and realizes that her marriage is not what she thought ; Putting down the cigarettes: The only honest quit-smoking article you'll ever read ; Why I chose to culturally appropriate white girls for Halloween this year ; Ireland's very own ; Inside the life of Kendrick Nunn ; Men's basketball takes on the Chippewas in hurricane relief game ; Swim and Dive gears up for season: The teams looks forwards to the Horizon League and welcomes new team member freshmen Bernadette Turchi ; Club sports: Water polo ; The Sporting Blitz ; Oakland Athletics hosts Tip-Off Gala: Fans mingle with women's and men's basketball teams; look forward to upcoming season