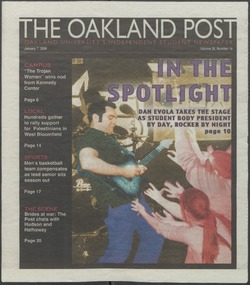 In the Spotlight ; THIS WEEK 1.7.09 ; STAFF EDITORIAL Hills is shooting deer in the dark ; Editor ditches the old standards for validation ; An encore of 'The Trojan Women' ; Campus events to fill the time between classes (instead of sitting in the car) ; Take a SMART route to Rochester: Funding options being explored for bus route to service local area ; Approved deer cull will not affect campus ; A royal connection ; Disposed dining to be donated by Chartwells: Food contractor combats hunger with students' food waste ; POLICE FILES ; New president rocks 89X show ; OUSC's new makeup ; Have you ever kept a New Year's resolution? ; Would you rather - Live in 2009 or a different time period? ; Gaza protest draws 500 ; "Another Skokie?" ; Ford; Toyota plunges ; In case you missed them: The Golden Grizzlies continue to play with the classrooms empty ; Men's Basketball ; Swimming and Diving ; NOTABLE NUMBERS ; Indoor Track & Field ; Women's Basketball ; Injury sidelines Nelson for season ; Golden Grizzlies Game of the Week: WOMEN'S BASKETBALL OU wears out NDSU enroute to big victory ; Attack of the bridezillas ; Tired of the same old reruns?: Tune in to these shows as they begin their new seasons ; "Scrubs" ; Hoping for change in 2009 ; Resolutions for the new year that should be on these celebrities' lists ; Diplomacy pushed for Mideast peace ; NEW BRIEFS ; Mushing through the snow ; Alaska trooper says politics slowed drug arrest ; Toyota to suspend Japan production in Feb. and March