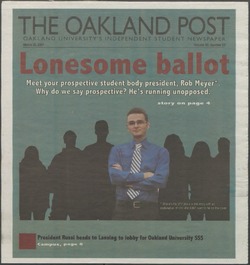 Lonesome Ballot ; THIS WEEK ; The easy road to victory: Rob Meyer and Jameelah Muhammad have been actively involved in many areas of campus life; making them a logical choice for the next student body president and vice president. But was anybody else qualified? We'll never know ; Russi battles for funds: President Russi joins ranks with eight Michigan universities to take on"the big three" and lobby for fair distribution of state funds ; Do Oakland University professors pass the test? ; New series;"Around the Tenure Track;"" explores the process of seeking tenure and how it affects the student body experience ; Raunch culture growing ; Author Ariel Levy shares her thoughts on pop culture and women's liberation ; NEWS BRIEFS ; POLICE FILES ; EDITORIAL If it bleeds it leads-straight down a slippery slope that robs us of what makes us American ; EARTH TALK: Questions & Answers About Our Environment ; Sorry; my browser can't do that ; LETTERS TO THE EDITOR ; The other side of the lake: You may not need to move across the country to find a flourishing job market and hip urban lifestyle ; Preserving history ; Leavin'on a jet plane ; Campus Clean Up: Good students who found bad things ; Wireless plan on schedule ; Mich. looks to raise state gas tax ; LOCAL NEWS IN BRIEF: Woman found strangled ; Who's your Tiger ; Motown gets spring fever!: Opening Day to take Metro Detroit by storm ; Sophomore slump? Hardly.: Track kicks off second season at OU ; Shut down: Baseball season continues to sour ; OU streak halted ; Who's gonna win?: Senior staff goes head-to-head on Final Four ; HOW'S YOUR BRACKET? ; New head coach looks to start over ; Thanks but I'll pass: Kampe has full intention of staying with Golden Grizzlies ; THE FRATELLIS: "Costello Music" ; MODEST MOUSE ; "We Were Dead" ; Gore Fest: Hills 2 bleeds its way to number 6 at the box office ; THE REAPING: Hillary Swank sells out to Hollywood and peroxide ; BLUE MAN GROUP ; Survival guide to LaRouche movement ; Spring has sprung and sundresses are in bloom