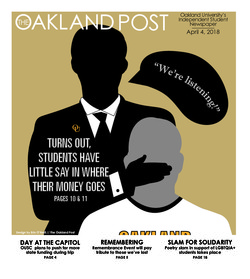 Turns out; students have little say in where their money goes ; Day at the Capitol. OUSC plans to push for more state funding during trip ; Remembering. Remembrance Event will pay tribute to those we've lost ; Slam for Solidarity ; A 'drive' into Bear Lake ; New student body government elected ; Students lobby for state funding increase: Discussing concerns with legislators in Lansing ; Students; staff and faculty meet at Elliot Tower for a memorial ; Anti-Abortion Group sparks outrage outside of Kresge ; Police Files: A Dodge dart vs. an unsuspecting student ; 1.9 grams and a pipe ; Assault at Ann V. Nicholson ; Ride Along with OUPD ; Waiting for a snap in the payment gap: Educators are underpaid in private and public schools; despite their level of degrees ; Millennials create a new age of global nationalism: Professor Derek Hastings touches on people's sense of nationalism in final lecture of History Comes Alive series ; How to make money while sitting on your butt ; How much does your voice matter? Here's a hint: not that much ; How SAFAC orgs would utilize the extra money ; "Love; Simon" made my cold heart love again ; #NeverAgain took the streets of Washington D.C. ; Political Focus: Yemen and the war nobody knows about: The United States' role in the worst humanitarian crisis in the Middle East ; George Ezra's second album is nothing short of "Paradise" ; Current Joys discovers a new way to connect ; Flying high while giving back ; The Wiggins retire after 24 years of teaching: Professors Bob and Jackie Wiggins say goodbye to Oakland after two decades of teaching ; Healthology Symposium on effects of upstream health ; Gay Straight Alliance hosts Slam for Solidarity II ; May Your Sib Be With You this weekend ; Baseball posers its way to a home opener series win: Men's basketball snatched the win from the Milwaukee Panthers with a score of 12-7 ; Amr El Sayed: from swimming to automotive ; The Lepley Center Project: the O'rena's new upgrade