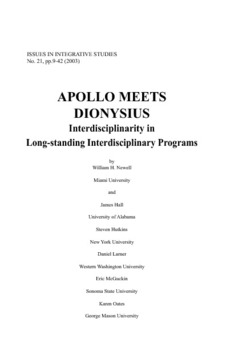 At the invitation of the AIS Board of Directors, representatives of several long-standing interdisciplinary programs gathered on October 9, 2003, to participate in back-to-back panel discussions at the 25th AIS conference. Following months of email exchanges prior to the conference, the panel moved quickly into an exploration of the common issues faced by such programs. Many, the panel discovered, can be examined fruitfully by extending Nietzsche’s distinction between the Apollonian and Dionysian, applied by him to tragedy, to an overview of experimental, interdisciplinary programs. In the panel discussion, it became apparent that this distinction could serve as a useful metaphorical lens through which to view many of the tensions that shaped the structures and practices of the programs represented. Since those structures and practices, in turn, influenced how faculty members and students each came to understand the interdisciplinary approach to education common to these programs, the panelists came to appreciate that the insights gained from viewing interdisciplinary education as an outcome of Apollonian-Dionysian tension are of more than passing or parochial interest.